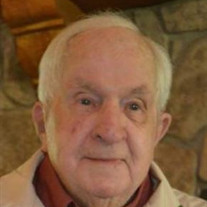 Al Brost, 96, of Mountainhome, died Tuesday, November 9, 2021 at St. Luke's Hospital in Allentown. He was the loving husband of the late Carolyn M. (Cummings) Brost, who passed away in 2020. Born in Schenectady, New York, he was a son of the late Adolf and Barbara (Galkiewicz) Brzostowski. A proud veteran, Al served in the United States Navy during WWII. He attended Siena College in New York. Al was of the catholic faith and member of the Most Holy Trinity Parish in Cresco. He was retired from the Tobyhanna Army Depot and member of the American Legion 922. Al enjoyed visiting and travelling to New York and Florida to spend time with best friends Herb and Aileen and sibling-in-laws Allen and Bev. He never missed a grandchild's sporting event and was their biggest fan. He was a bowler, hunter and fishermen. Al liked playing the lottery and hoped to win the big one someday. He had a sharp mind and a kind soul; a wonderful role model who will be greatly missed. He is survived by his son, Peter Brost and his wife, Laurie of Cresco; daughter, Janis Whitmore and her husband, Frank of Mountainhome; grandchildren: Christopher Brost and his wife, Beth; Daron Whitmore and his wife, Marlea; Kevin Brost and his wife, Angelica; and Gavin Whitmore; great-grandchildren: Jackson and Benjamin Brost; twins, Kieran and Kingry Whitmore; and several special nieces and nephews. In addition to his wife and parents, Al was preceded in death by his siblings: Irene Mitchell and Alexander Brzostowski. There will be a visitation from 11 a.m. to noon Friday, November 19 at Bolock Funeral Home, 6148 Paradise Valley Road, Cresco. Deacon Len will conduct a service at 12 p.m. at the funeral home. In lieu of flowers, memorial donations may be made to AWSOM Animal Welfare Society of Monroe, PO Box 13, Stroudsburg, Pa 18360. Private cremation has been entrusted to Bolock Funeral Home Crematory.

Al Brost, 96, of Mountainhome, died Tuesday, November 9, 2021 at St. Luke's Hospital in Allentown. He was the loving husband of the late Carolyn M. (Cummings) Brost, who passed away in 2020. Born in Schenectady, New York, he was a son of the... View Obituary & Service Information

The family of Al Brost created this Life Tributes page to make it easy to share your memories.

Send flowers to the Brost family.