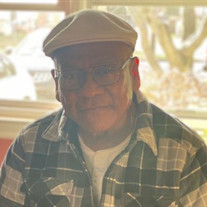 Augusto "Tito" Sandino, 69, of Long Pond, died Monday, November 8, 2021 at St. Luke's Hospital in Bethlehem, with his family by his side. He was the loving husband of Leona (Markham) Sandino, with whom he shared 42 years of marriage. Born in Panama, he was a son of the late Rene and Maria (Rodriguez) Sandino. Tito moved to the United States in 1988 and lived in the Paterson, New Jersey area for many years. Tito moved to the Poconos 13 years ago and became a school bus driver for the Pocono Mountain School District, which he enjoyed immensely. In his spare time, Tito was an avid bingo player and enjoyed playing along with his wife. In addition to his wife, he is survived by his children: Yamileth (Matthew) and Erick (Maria and Vicki) Rodriguez ; Augusto Jr, Hiram, and Keoma (Jessica) Sandino; brother, Rene Sandino; sister, Yolanda Chaverri; grandchildren: Keanu (Emily) Rodriguez; Khaylan (Jenya), Nicholas and Melanie Acuña; Gabriela, Diego and Andres Rodriguez; Jason Patino; and Alex Sandino; great-granddaughter, Iris Viazovov; and several nieces and nephews. His playfulness, sense of humor and infectious giggle will forever live in our hearts. In honor of his strong belief of Karma (action) which generally denotes the cycle of cause and effect - each action a person takes will affect him/her at some time in the future. We are glad that Tito's Gift of Life will change many peoples lives and rewrite their story. There will be a visitation from 2 to 4 p.m. Saturday, November 13 at Bolock Funeral Home, 6148 Paradise Valley Road, Cresco. In lieu of flowers, memorial donations may be made to the American Cancer Society by visiting donate3.cancer.org or Gift of Life Donor Program by visiting donors1.org Private cremation has been entrusted to Bolock Funeral Home Crematory.

Augusto "Tito" Sandino, 69, of Long Pond, died Monday, November 8, 2021 at St. Luke's Hospital in Bethlehem, with his family by his side. He was the loving husband of Leona (Markham) Sandino, with whom he shared 42 years of marriage. Born in... View Obituary & Service Information

The family of Augusto Cesar Sandino created this Life Tributes page to make it easy to share your memories.

Send flowers to the Sandino family.