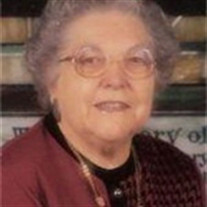 Clara E. DePue, 91, of Paradise Valley, died Wednesday morning, October 10, 2007. She was the wife of the late Charles E. DePue who passed away in 1983. Born in Forest Park, she was the daughter of the late Horace B. and Flossie (Starner) Stiff. She was a dedicated member of Keokee Chapel in Paradise Valley. Clara was a founding member of the Willing Workers of Paradise Valley. She was also a member of the Creekside Quilters, where she was designated the "Executive Dishwasher and Clean-Up Crew". When her children were young, she was involved in the PTA, organizing a school cafeteria. Clara was assistant leader of the Paradise Girl Scout Troop when her daughters where younger, and years later as assistant den mother for her son's Cub Scout den. She was among a group who had the foresight to see the need for a Community Center, now known as "The Roof" in Paradise Valley. She served as secretary of the Starner Reunion for many years. In 2001, she was voted Citizen of the Year in Paradise. More recently, Clara aided the Pocono Mountain Fire Company Ladies Auxiliary by phoning Paradise residents requesting donations of baked items to be sold at the Fire Company's carnival. She is survived by a son, Charles E. DePue, Jr. of East Stroudsburg; three daughters, Betty J. Williams and her husband, Ralph of Paradise Valley, Cathleen D. Smith of Paradise Valley, Nancy E. Dailey and her husband, Samuel of East Stroudsburg; a sister, Ruth E. Werkheiser of Stroudsburg; five grandchildren, Lori Funk of Canadensis, Linda Myers of Saylorsburg, Jamie Berish of Woodale, Jill Perez of Cresco, Aaron DePue of Tannersville; eight great-grandchildren, Michael and Molly Myers, Nicholas and Kalie Berish, Erik Funk, Garielle Perez, Rachelle Offidani, Lucas Michael DePue; and several nieces and nephews. She was preceded in death by a sister, Anna Evans and two brothers, George and Horace Stiff. The Pastor Paul Kroll will conduct a funeral service at 10:00 a.m. on Saturday, October 13 at the Bolock Funeral Home, corner of Routes 940 & 390 in Paradise Valley. Burial will follow at Keokee Chapel Cemetery. There will be a viewing on Friday, October 12 from 7:00 p.m. to 8:30 p.m. at the funeral home. In lieu of flowers, memorial donations may be made to the Willing Workers of Paradise Valley, c/o Lorraine Edgley, 3564 Williams Road, Cresco, Pa. 18326

Clara E. DePue, 91, of Paradise Valley, died Wednesday morning, October 10, 2007. She was the wife of the late Charles E. DePue who passed away in 1983. Born in Forest Park, she was the daughter of the late Horace B. and Flossie (Starner) Stiff.... View Obituary & Service Information

The family of Clara DePue created this Life Tributes page to make it easy to share your memories.

Send flowers to the DePue family.