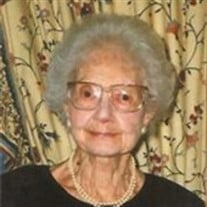 Clotilda C. Wile, 97, of Cresco, died Monday, April 4, 2011 at Hospice Community Care in Dunmore. She was the wife of the late Lawrence "Joe" Wile Sr. to whom she was married for 58 years. Born in New York, she was the daughter of the late Antonio and Caterina (Benedetto) Comazzi. Clotilda lived in New York City until the age of four before moving to the country with her family where they owned and operated a small inn, Villa Brentini. She met her future husband "Joe" when he took a teaching position at Barrett School District. They were married in 1933. Clotilda was employed by the National Drug Company in Swiftwater, now Sanofi-Pasteur. Before her retirement, she worked as a bookkeeper at Buckhill. She was a devout member of St. Bernadette's Church for most of her life, where she sang in the choir, was a member of the church auxiliary, and was in charge of Bingo. She was a loving and caring individual who was always available for comfort and support. A wonderful cook, she hosted many holiday parties. She loved to play Bingo and spend time with her family, especially being a best friend to her grandchildren, nieces and nephews. Clotilda had a way of always making everyone laugh. She is survived by a brother, Joseph Comazzi and his wife Mary of Highland MI; six grandchildren, Timothy W. Price and his wife Stephanie of Canadensis, Jeffrey A Price and his wife Carla of Canadensis, David D Price and his wife Eleanor of Cresco, Carl L Price and his wife Shannon of Canadensis, Jason A. Wile and his wife Christina of Reeders, Megan E. Dunlap and her husband Matthew of Cresco, sixteen great grandchildren; and many nieces and nephews. She was preceded in death by a son, Lawrence L. Wile, Jr. a daughter, Jeanne Price of Canadensis, a sister Pierina Davies. There will be a viewing on Thursday evening, April 7 from 6:00 to 8:00 p.m. at the Bolock Funeral Home, Rt. 940 in Cresco. The Reverend Father Joseph Kopacz will celebrate a Mass of Christian Burial on Friday, April 8 at 10:00 a.m. at St. Bernadette's Church in Canadensis. Burial will follow at Moravian Cemetery in Canadensis. In lieu of flowers, the family has requested that memorial contributions be made in Clotilda's name in Honor of Jeanne (Wile) Price to the MSAA (Multiple Sclerosis Association of America), National Headquarters, 706 Haddonfield Road, Cherry Hill, NJ 08002 or [email protected]

Clotilda C. Wile, 97, of Cresco, died Monday, April 4, 2011 at Hospice Community Care in Dunmore. She was the wife of the late Lawrence "Joe" Wile Sr. to whom she was married for 58 years. Born in New York, she was the daughter of the late Antonio... View Obituary & Service Information

The family of Clotilda Wile created this Life Tributes page to make it easy to share your memories.

Send flowers to the Wile family.