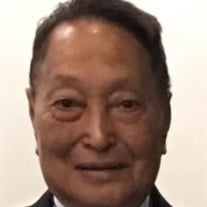 Domingo G. Tengco, 92, of Mount Pocono, died Monday, May 10, 2021 at home. He was the loving husband of Ester Calata Tengco, with whom he shared 70 years of marriage. Born in the Philippines on August 4, 1928, he was the son of the late Alejandro and Maxima Gregorio Tengco and was one of 12 children. He was a star athlete in his childhood days playing softball and later on baseball. Domingo was offered a scholarship from National University where he became the star center fielder of his baseball team. He became the playing coach of the Central Bank of the Philippines baseball team where he worked after graduating college. He served as 1st Lieutenant Reserved Officer of Philippine army and was recognized as a Philippine WWII veteran. Domingo became a leader of several organizations in his community and was beloved by his peers. He served as Grand Knight of St. Ignatius de Loyola Council 12237 Knight of Columbus. He quit his job to become an entrepreneur and started a garment manufacturing business with his wife. Domingo was fortunate to travel around the world with his wife after retirement. With all his accomplishments, he always believed that family comes first and that made him the best husband, the best dad, and the best Lolo "grandpa". In addition to his wife, he is survived by his children: Drs. Romulo and Mafalda Tengco; Myrna Tengco; Joey and Tess Tengco; Tito and Maribeth Tengco; Connie and Albis Quintero; Olive and Ogie de Borja; Rollie and Heather Tengco; Willie and Jennie Tengco; grandchildren: Dr. Eileen and Mike Kaczmarczyk; Chris and Lexi Tengco; Dr. Derrick and Nhu Tengco; Raymond Abrecea; Ryan and Maria Leonor Abrecea; Jenjen and Ruehl Cadongonan; Joanne Tengco; Tom Tengco; Jonathan and Kelly Tengco; Liza Tengco; Monica and Alexander Banzon; Rebecca Quintero; Robin de Borja; Oliver de Borja; Kevin Tengco; Kyle Tengco; Trisha Tengco; Yanna Tengco; and Angela Tengco; great-grandchildren: Alexis, Gabe, Eden, Miagrace, Jasmine, Jihan, Juliana, Janine, Thomas, and Liliana; and his brother, Generoso Tengco. Domingo was preceded in death by his parents, ten siblings, and his son, Domingo Francis Tengco Jr. There will be a viewing from 1 to 4 p.m. with Reverend Father Isidro (Sid) Marinay beginning a blessing service at 2 p.m. Sunday, May 16 at Bolock Funeral Home, 6148 Paradise Valley Road, Cresco. Reverend Father Richard Czachor will conduct a Mass of Christian Burial at 10 a.m. Monday, May 17 at Our Lady of Victory, 327 Cherry Lane Road, Tannersville. Private cremation is entrusted to Bolock Funeral Home Crematory.

Domingo G. Tengco, 92, of Mount Pocono, died Monday, May 10, 2021 at home. He was the loving husband of Ester Calata Tengco, with whom he shared 70 years of marriage. Born in the Philippines on August 4, 1928, he was the son of the late Alejandro... View Obituary & Service Information

The family of Domingo G. Tengco created this Life Tributes page to make it easy to share your memories.

Send flowers to the Tengco family.