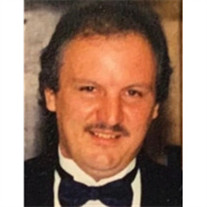 Donald "Don" M. Keim Sr., 62, of East Stroudsburg, died Monday, January 11, 2021. He was the loving husband of Bonny (Groller) Keim, with whom he shared 22 years of marriage. Born in San Antonio, Texas, he was a son of the late Albert Keim and Betty (Slutter) Buddenhagen. Having grown up in Philadelphia, he was a Motown man, who loved music and attending concerts with his wife. Don worked as a filler operator at the former RockTenn Paper Mill in Delaware Water Gap. He loved the outdoors, was a great mechanic, and he especially enjoyed riding his Harley Davidson. Don liked pressing his luck, and enjoyed gambling and playing the lottery. He was a member of the VFW Post 2540 and the CLU club both in East Stroudsburg. Don was a wonderful storyteller, who will be dearly missed. In addition to his wife, he is survived by his children: Donald Keim Jr. and his wife, Joanne of Saylorsburg; Thomas Getz Jr. of Gawleybridge, West Virginia; Myles Shearer of East Stroudsburg; Michelle Shearer of East Stroudsburg; sisters: Cynthia Werkheiser of East Stroudsburg; and Susan McWilliams of Tannersville; brothers: Michael Craig of Stroudsburg; David Craig of Stroudsburg; William Craig of La Vernia, Texas; Chuck McWilliams of Stroudsburg: grandchildren: Travis, Gage, and Madison Keim,; Caitlyn Zerby; Conner Devlin; Ethan Zerby and Levi Santiago; and great-granddaughter on the way. In addition to his parents, he was preceded in death by sister, Barbara Berkey and brother, Eugene Craig. A memorial service will be held at a later date; private cremation has been entrusted to Bolock Funeral Home Crematory. In lieu of flowers, memorial donations may be made to the American Diabetes Association by visiting diabetes.org, the CLU 275 Mill Creek Road, East Stroudsburg, Pa 18301, or the VFW Post 2450, 20 Fawn Road, East Stroudsburg, Pa 18301.

Donald "Don" M. Keim Sr., 62, of East Stroudsburg, died Monday, January 11, 2021. He was the loving husband of Bonny (Groller) Keim, with whom he shared 22 years of marriage. Born in San Antonio, Texas, he was a son of the late Albert... View Obituary & Service Information

The family of Donald M. Keim created this Life Tributes page to make it easy to share your memories.

Send flowers to the Keim family.