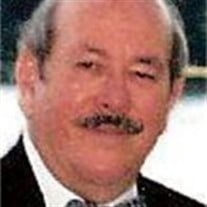 Elliot Wilkins, 78, of Souderton, Pa. previously of Mt. Pocono and former Senior Vice President of Caesars Pocono Resorts, passed away on Saturday, January 6, 2007 after a long and courageous battle with Vascular Dementia. Born in Stroudsburg on April 28, 1928, Elliot was the son of Ben and Rose Wilkins. He graduated from Stroudsburg High School in 1945 and served in the Calvary of the U.S. Army for two years at the end of World War II. After receiving an Honorable Discharge from the Army, he attended Upper Iowa University where he graduated with a B.S. Degree in Accounting and Economics. In 1962, Elliot attained a Law Degree from LaSalle Extension University in Chicago. Elliot's career in business started as an insurance adjustor in Philadelphia. He later became a very accomplished Stock Broker at the Firm of Hornblower and Weeks also in Philadelphia. In 1971, he left the brokerage business and accepted a position as the manager of six Lums Restaurants in the Philadelphia Area. In February of 1974, he received a call from his brother, Morris B. Wilkins who offered him a position as an executive at Caesars Pocono Resorts. At that time, Caesars Pocono Resorts was made up of only two resorts: Cove Haven and Paradise Stream. Through the years, Morris and Elliot grew the business to include Pocono Palace and Brookdale. By 1984, the four Caesars resorts in the Poconos were Caesars World's most profitable businesses and employed close to 700 team members. They continue to be extremely profitable today. Over the years, Elliot became a beloved leader within Caesars and throughout the Pocono Mountains. His team members, fellow executives, community leaders and even his competition loved him for his honesty, integrity and calm demeanor. He enjoyed being part of the Caesars family and was especially proud of the team members who to this day are the best in the world. He is survived by his wife of 48 years, the former Connie Jo Grossman of Souderton; his two sons, Dr. H. Jeffrey Wilkins and his wife, Donna of Sellersville and Douglas J. Wilkins of Hawley; his brothers Morris and Dave; his grandchildren, Briana, Brooke, Samuel, Eva, Eliza and Isaac; daughter-in-law, Sue Ann Wilkins and many friends and family members who will miss his laugh, his devotion to family, his loyal friendship and his sage advice. He always felt that his legacy was his children and grandchildren and he was proud of their accomplishments and excited at their potential to make the world a better place. His grandchildren made him happy and he loved them more than anything and they loved their "Pop E" and "Pop Elliot". Friends and acquaintances may call from 6:00 to 9:00 p.m. on Wednesday, January 10, 2007 at Bolock Funeral Home at the corner of Routes 940 and 390 just East of Paradise Stream in Paradise Valley, PA. Funeral services will be held at 10:00AM on Thursday, January 11, 2007 at Bolock Funeral Home. Interment will take place at the Pine Grove Cemetery in La Anna, PA. In lieu of flowers, memorial donations may be made to Harmony House at Dock Woods; 275 Dock Drive, Lansdale, PA 19446.

The family of Elliot Wilkins created this Life Tributes page to make it easy to share your memories.

Send flowers to the Wilkins family.