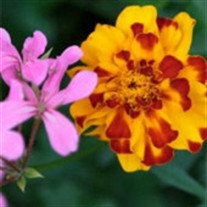 Francella Mary Coffman, 90, of Las Vegas, Nevada, formerly of Paradise Valley, passed away on Friday afternoon, December 1. She was the loving wife of W. Clayton Coffman. She was born in Forestville, New York, July 26, 1916, the daughter of the late Reverend George W. Clement and Lillian M. Warner Clement, and her earliest years were spent in Chautauqua County, New York. She was a long-time member of the Assemblies of God and was deeply involved in many ministries of the churches wherever she lived. She lived in New York State, New Jersey, Pennsylvania, Ohio, and for the past several years, in Nevada, with her daughter, Paula. At one time she and her husband, Clayton, lived for an extended period in South Africa where he was overseeing the building of church facilities. She enjoyed traveling and among her other interests, she enjoyed needlework and created many lovely quilt tops for her family members. In addition to her husband, Clayton, she is survived by one daughter, Paula Martel of Las Vegas; a son, John E. Arnold and his wife, Doris, of Santa Ana, California; two grandsons, Philip and Steven Arnold; one great grandson, Eric Arnold; and one sister, Georgia Lee Gurdiski. She was preceded in death by her brother, Perry Clement. The Reverend John E. Arnold, Francella's son, will conduct a Funeral Service at 10:30 AM on Saturday, December 9th, at the Bolock Funeral Home, corner of Routes 940 & 390 in Paradise Valley. Guests may call at the funeral home beginning at 10:00 AM until the time of service. Interment will immediately follow the service at Keokee Chapel Cemetery. In lieu of flowers, donations may be sent to: Straight from the Streets in Las Vegas, 5714 W. Lake Mead Blvd., Las Vegas, NV 89108-3199. Attn: Linda Lera Randle-El.

Francella Mary Coffman, 90, of Las Vegas, Nevada, formerly of Paradise Valley, passed away on Friday afternoon, December 1. She was the loving wife of W. Clayton Coffman. She was born in Forestville, New York, July 26, 1916, the daughter of... View Obituary & Service Information

The family of Francella Coffman created this Life Tributes page to make it easy to share your memories.

Send flowers to the Coffman family.