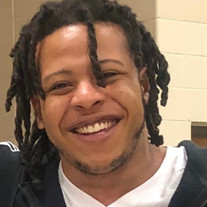 Frederick "James" McConnell, called "James" by those who knew him, was born November 9, 1993 and departed this earth on February 11, 2022. He was born in Sunnyvale California and moved to NY with his family where he lived until age 15 when his family moved to Pocono Summit, PA. James attended and graduated from Pocono Mountain East High School. After Graduation he lived in various places eventually settling in Berwick Pa, where he lived until his untimely death. He was amazingly self-determined and resilient, fiercely loyal and he had the unique ability to elevate everyone around him with his magnetic charm and easy going demeanor. He will be greatly missed and his legacy will be honored and carried on by those who loved and knew him. Survivors: James will be lovingly remembered by his parents, Sheldon & Linda Ferrette; brother, Joseph; sister, Alyssa; grandparents, Joyce Ferrette, and Adina Curi; aunts and uncles, Carmela and Jose Vazquez, Miozotis and Javier Vigil, Sharon and Lal Samtani, Stephen and Laverne Ferrette, Rodolpho and Joanne Acosta, Norma and Leroy Yoshinaga, Renzo and Nitza Scott. Marcos Scott, Claudio Scott, and Anselmo Acosta and Dinora Curi; cousins, Jasmine Scott, Zeldon, Alana, Adrianna Vazquez and Jose Vazquez Jr, Alexis and Amanda Scott, Ramon and Celina Orlang, Bianca and Javier Vigil Jr, Felisha, Marcus Jr, Trinity , Isaac and Jeremy Scott, Kianna and Malcom Scott, Deanna Acosta, Samuel Scott Jr, Tajina Scott-Colon, Aisha Scott, Francesca, Yusuf and Franklin Smith, Hazenth Scott, Yaniris Scott, Nitza Galarga and Asana Ferrette and numerous beloved second and third cousins. He is preceded in death by his grandparents Cornelia Brown, Alfredo Scott, and Jacob Ferrette; uncle Samuel Scott, and cousins Jon-Darin Acosta, and Samanta Scott. Services: A funeral service will take place at 4:00P.M. on Saturday, February 19, 2022 in the Bolock Funeral Home, 6148 Paradise Valley Road, Cresco, Pa 18326 where the family will receive friends and relatives from 2:00P.M. until the time of service.

Frederick "James" McConnell, called "James" by those who knew him, was born November 9, 1993 and departed this earth on February 11, 2022. He was born in Sunnyvale California and moved to NY with his family where he lived until age 15 when his... View Obituary & Service Information

The family of Frederick James McConnell created this Life Tributes page to make it easy to share your memories.