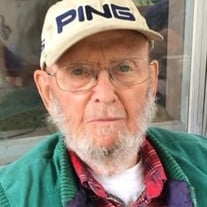 George G. Brosius Sr., 100, of Swiftwater, passed away peacefully, Sunday, December 5, 2021, at his daughter's home. He was the loving husband of the late Sophia (Thomas) Brosius, for 69 years. Born in Winfield, on June 6, 1921, George was a son of the late Clair E. Brosius and Theresa (Shaffer) Brosius. George was honorably discharged after serving three months in the United States Army in 1940, due to suffering a skull fracture prior to enlisting. He worked 30 years at the Tobyhanna Army Depot. After his retirement, he served as the first Zoning Officer of Paradise Township. He later served proudly as a PA State Constable for over 15 years. George was an avid outdoorsman who enjoyed hunting, camping, gardening and fishing. A passionate beekeeper for over 50 years and also a member of Masonic Lodge 780 in Cresco for 49 years. He also spearheaded the annual carnival beef roast as an associate member of the Pocono Mt. Volunteer Fire Company, Mount Pocono. He is survived by his four children who were blessed to have had him as their father. George G. Brosius Jr., and his wife Monica of Swiftwater; Ronald R. Brosius, and his wife, Christine of Huntington, Vermont; Steven S. Brosius of Swiftwater; and Renee Salamone, and her husband, Carmine of East Stroudsburg. George was one of 13 children and will be missed by his surviving siblings: Violet Gemberling of Sunbury; Eugene Brosius of Northumberland; and Avis Bailey of Harrisburg; as well as six granddaughters; six great-grandchildren and many nieces and nephews. A viewing will be held at the Bolock Funeral Home, 6148 Paradise Valley Road, Cresco, from 11 a.m. to 1 p.m. on Saturday December 11th. Private interment will follow at Keokee Chapel Cemetery, in Paradise Valley. In lieu of flowers, memorial donations may be made to the Pocono Mt. Volunteer Fire Company, by visiting pmvfc.com/welcome.html

George G. Brosius Sr., 100, of Swiftwater, passed away peacefully, Sunday, December 5, 2021, at his daughter's home. He was the loving husband of the late Sophia (Thomas) Brosius, for 69 years. Born in Winfield, on June 6, 1921, George was... View Obituary & Service Information

The family of George G. Brosius Sr. created this Life Tributes page to make it easy to share your memories.

Send flowers to the Brosius family.