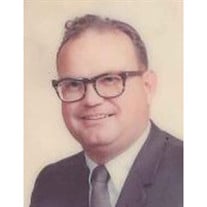 George Kirms, 86, of Mountainhome, died Sunday, after a long-term illness, November 22, 2020, at Lehigh Valley Hospital-Pocono in East Stroudsburg. He was the loving husband of Carol (McCarthy) Kirms, with whom he shared 57 years of marriage. Born in Orange, New Jersey, he was the son of the late George H. and Olivia F. (Schulstadt) Kirms. He was a 1952 graduate from Asbury Park High School in New Jersey. A proud Veteran, George was called twice to service his country in the United States Army; first in Kaiserslautern, Germany and second, during the Cuban Missile Crisis in Massachusetts. After his honorable discharge, George apprenticed with a local construction firm in Monmouth County, New Jersey, before working as a union mason over the next 18 years. He later worked as a maintenance mechanic at Gateway National Park in Sandy Hook, New Jersey. After his retirement in 1994, he and Carol moved to the Poconos. George always enjoyed fixing up old houses and making them "like new," taking pride in his detailed work. He enjoyed swimming, history, and cars, especially his red Ford F-150 pickup truck. Along with his wife, he was a long-time member of the Canadensis Methodist Church and the Fraternal Order of Eagles in Stroudsburg In addition to his wife, he is survived by his daughter, Karen Prochaki and her husband, Steven of Bradley Beach, New Jersey; brother-in-law, Alan McCarthy and his wife, Cecelia of Lebanon, New Jersey; sister-in-law, Valerie Hensley of Syracuse, New York; grandson, Terrence Petch; granddaughter, Lamberly Petch and her partner, Richard; great-grandchildren Jakob, Adrian, and Pedro all of Myrtle Beach, South Carolina, and other family and friends. In addition to his parents, he was preceded in death by his sister, Olivia Ann Crammer, beloved son, Brian Douglas, and great-grandson, Christian Tirado. There will be a viewing from 2 to 4 p.m. Wednesday, November 25 at Bolock Funeral Home, 6148 Paradise Valley Road, Cresco. Pastor John Keretzman will conduct a service at 4 p.m. followed by Military Honors at the funeral home. Entombment will take place at 12:30 p.m. Friday, November 27 at Forest Green Park Cemetery in Morganville, New Jersey. In lieu of flowers, memorial donations may be made to the Children's Hospital of Philadelphia by visiting chop.edu.

George Kirms, 86, of Mountainhome, died Sunday, after a long-term illness, November 22, 2020, at Lehigh Valley Hospital-Pocono in East Stroudsburg. He was the loving husband of Carol (McCarthy) Kirms, with whom he shared 57 years of marriage. Born... View Obituary & Service Information

The family of George Kirms created this Life Tributes page to make it easy to share your memories.

George Kirms, 86, of Mountainhome, died Sunday, after a long-term...

Send flowers to the Kirms family.