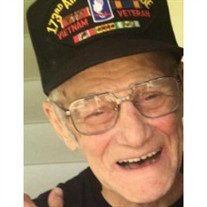 Harry D. Rider, Jr, 86, passed away peacefully on December 17, 2020 at Allied Services Hospice Center in Scranton. Born on July 13, 1934 in Delaware Water Gap, he was a son of the late Harry D. and Catharine (Hulitt) Rider. Harry had been a resident of the Gino J. Merli Veterans' Center since 2018 and prior to that had resided in Tobyhanna. He graduated from Barrett Consolidated High School at the age of 16 and enlisted in the United States Army at the age of 19 where he spent 33 years. Harry was a proud veteran of the Army Special Forces and retired as a CWO4. He served in Korea, 173rd Airborne unit in Vietnam, 508th Infantry Regiment in Panama, and several other duty stations with the 6th, 7th, and 10th Special Forces. His military decorations include, the Legion of Merit with Oak Leaf Cluster, Air Medal, Bronze Star with Valor and three Oak Leaf Clusters, Meritorious Service Medal with Oak Leaf Cluster, the Army Master Parachutist Badge, Vietnamese and German Parachutists' Badge, along with the Special Forces Tab, and many other campaign and service medals. Harry was selected by the Secretary of the Army to continue his service beyond 30 years and was instrumental in farming a program to train and place an Army Warrant Officer in every SF "A"Team. The Army continued to honor him after retirement by appointing him the 1st Honorary Warrant Officer of the A.G. Corps for three years and also as the Honorary Warrant Officer of S.F., a position he held for 15 years. He is survived by his daughter, Sandra Rider and Jeff of Manassas, Virginia; son, Bradley Rider and his wife, Cindi of Tobyhanna; daughter-in-law, Kristin Rider of Tannersville; grandchildren: Harry D. Rider V, Briana B. Rider, Paul W. Rider, Anthony Pulli and Brent Pulli; and Gage Haas; great-grandchildren: Jamisen Rider and Carson Rider; sisters: Effie Vranka, Bonnie Rine; brother, James Rider as well as many nieces and nephews. He was preceded in death by his wife of 59 years Shirley (Keiper) Rider; sons: Harry D. Rider IV, and Brian K. Rider; granddaughter, Megan A. Rider; and sisters: Carletta Rider and Kathleen Buckley. There will be a viewing from 12:30 to 2:30 p.m. Sunday, December 20 at Bolock Funeral Home, 6148 Paradise Valley Road, Cresco. Reverend John Keretzman will conduct a prayer service at 2:30 p.m. at the funeral home. Interment with Military Honors will follow at Keoke Chapel Cemetery, Cresco. In lieu of flowers, donations may be made to the Special Forces Charitable Trust, P.O. Box 53, Essex, CT 06426 or by visiting [email protected]

Harry D. Rider, Jr, 86, passed away peacefully on December 17, 2020 at Allied Services Hospice Center in Scranton. Born on July 13, 1934 in Delaware Water Gap, he was a son of the late Harry D. and Catharine (Hulitt) Rider. Harry had been... View Obituary & Service Information

The family of Harry D. Rider, Jr. created this Life Tributes page to make it easy to share your memories.