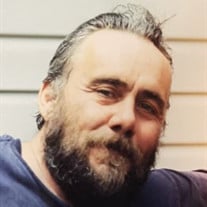 Not sure what to send?

**UPDATED SERVICE INFORMATION** A CELEBRATION OF LIFE WILL BE HELD ON SATURDAY, JUNE 18, 2022 FROM 2 TO 6 P.M. AT BLANCHE PRICE PARK, 105 GOVERNMENT WAY, POCONO PINES, PA. FAMILY AND FRIENDS ARE WELCOME. Herbert (Herbie) John Lettmoden, 66, passed away at home peacefully on Wednesday January 26th, 2022. Born in Flushing NY, he was the son of Herbert and Frances (Lynch) Lettmoden. He graduated from Martin Luther HS in 1973 and attended York College in Queens, NY where he was considering a career in environmental science. Sadly, during his late teen years he was diagnosed with mental illness - possibly related to two prior serious head injuries he had sustained. Herbie became both a victim and a lifelong warrior in the world of mental illness. During the many years in which he suffered and endured the trials and tribulations of the mental health system, he vacillated between good periods and difficult times - times when he was happy and fully present in our lives and times in which he was lost to us... and to himself. Anyone who has themselves, or with a loved one, dealt with mental illness will attest to the heartbreaks of this reality. Despite it all, Herbie was a jewel of a human being... He literally would and often did, give the shirt off his back to others. Or his jacket... Or his shoes... Or one of the many harmonicas he always played... so well. Though so many times in his life he had, or owned NOTHING, he freely gave whatever he had to others. Many are the times we asked him why he gave his things away...and his answer was always, "He needed it more than I did." This was our brother. And that was his Faith... That God would always provide... That Jesus was EVER-PRESENT... an absolute reality in his life. Herbie had a brilliant and inquisitive mind. If by chance he didn't know about something one might be describing, he was always interested in learning more about it. He was a natural musician and had a great aptitude, playing harmonica at home at an early age. He sang well and harmonized. He loved music, writing, and poetry and knew all the lyrics to so many songs... He loved the music of Bob Dylan, Neil Young, The Band and many artists of the '60's and '70's. He had a stellar sense of humor which ran the entire gamut from wry to sarcastic to the totally absurd. He was so funny! And he never failed to connect the dots in any conversation. Even in his darkest days there was a brilliant light in him...this was undeniable. Herbie was a long time resident of the Poconos, Allentown and Bethlehem, most recently residing in Long Pond. After the many years of losing him and finding him again we were so grateful to finally have him back in our lives in 2019. He was happy, and in love with his dear Cheryl, his companion of 25 years. They lived together in Harrisburg for a few good years before returning to Long Pond after the awful diagnosis..... so long unknown, that there was no longer any possible cure. Herbie accepted this fate and handled it with grace, dignity and humor. Such a profound sadness has engulfed us these past months... Still, we know we were greatly blessed... That the time of his intense suffering was short-lived... And the LOVE of his family and friends was lifelong...And is Forever. At long last he is in the arms of Jesus, his Beloved Lord and Savior, finally resting in peace. He is survived by his companion Cheryl; sisters Elizabeth Lobo of Tucson, Arizona; Katherine Daigle and her husband Maurice of Long Pond, Pennsylvania; Margaret Kaso and her husband Joseph of Flushing, New York; and Mary Ciafrei and her husband Chris of Long Pond, Pennsylvania; his Godmother Dorothy Steneck of Astoria, New York; six nephews; three nieces; four great nieces; and one great nephew. He was proceeded in death by both his parents and nephews, O'Neil Patrick Daigle and Chris David Ciafrei.

The family of Herbert John Lettmoden created this Life Tributes page to make it easy to share your memories.

A CELEBRATION OF LIFE WILL BE...