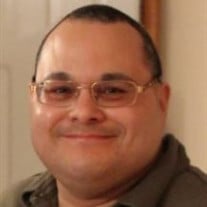 Humbert "Bert" Lebron Vihlstrand, 53, of Tobyhanna, died after battling an illness for nearly a year on Saturday, October 2, 2021 at Gracedale Nursing Home in Nazareth. He was the loving husband of Ana Class, with whom he shared 25 years together. Born in Manhattan, New York, he was the adopted son of George O. Vihlstrand of Flushing, New York, and the late Salemer "Sally" A. Vihlstrand, and birth parents of Mario Lebron and Elba Soto of Florida. Bert received his GED and worked as a security guard for many years. He was an avid reader as well as a history buff and enjoyed watching the history channel, reading non-fiction historical books, and reading the New York Post. He was a devoted fan of the New York Yankees, New York Giants, and the Cleveland Cavaliers, and almost never missed a game if his team was playing. Bert also greatly enjoyed watching movies with his family and friends and collecting antique and movie memorabilia. Star Wars was his favorite, followed closely by Marvel superhero films. He had a great sense of humor and was always quick with a joke and ready to kick back with a beer and enjoy life. Bert loved animals and nature and had a heart for rescue animals and believed that all animals deserved a good, loving home. In addition to his wife and father, he is survived by his three children: William, Catherine, and Brian; twin brother, Maurice "Mo" Vihlstrand of East Elmhurst, New York; brother, Francisco "Franky" Soto-Gonzalez of Oldsmar, Florida; Bert also leaves behind his dear friends, Patricia Ramous; Irene Piriczky; Joseph and Melissa Piriczky and family; and John and Kathleen O'Connell and family, all of Tobyhanna; and Eric Piriczky of Bethlehem. He became such a huge part of their family and their lives over the years and was lovingly thought of as an uncle. There will be a viewing from 2 to 4 p.m. Thursday, October 7 at Bolock Funeral Home, 6148 Paradise Valley Road, Cresco. Reverend Father Richard Czachor will conduct a Mass of Christian burial at 11 a.m. Friday, October 8 at Our Lady Victory Catholic Church in Tannersville, followed by interment at St. Catherine's Cemetery in Moscow. In lieu of flowers, memorial donations may be made to the American Diabetes Association by visiting diabetes.org.

Humbert "Bert" Lebron Vihlstrand, 53, of Tobyhanna, died after battling an illness for nearly a year on Saturday, October 2, 2021 at Gracedale Nursing Home in Nazareth. He was the loving husband of Ana Class, with whom he shared 25 years together. Born... View Obituary & Service Information

The family of Humbert Vihlstrand created this Life Tributes page to make it easy to share your memories.

Send flowers to the Vihlstrand family.