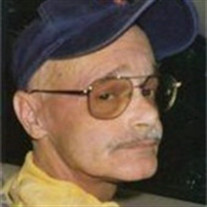 James Robert Shoudt, 50, of Pocono Summit, died Friday morning, July 11 at the VNA Hospice House of Monroe County in Smithfield Twp. He was the husband of Kathleen Shoudt with whom he celebrated 12 years of marriage on June 7, 2008. Born in Flemington, NJ, he was the son of the late Wilson and Jean (Brinckloe) Shoudt. James graduated from Rutgers University with an Associate degree in Arboriculture. He was a past President of the Friends of The Frelinghuysen Arboretum in Morristown, NJ and served in the U.S. Marine Corps. James played softball for the "Midnight Tokers", a Monroe County based team. He was of the Lutheran faith. James loved the outdoors and fishing; he was an avid skier and bowler, but his true passion was to spend time with his wife, Kathy. In addition to his wife Kathleen, James is survived by a step-son: Richard John Ollis of Riverview, Fl; a step-daughter: Kristy Ollis of Haverhill, Ma; a brother: Alan Shoudt and his wife Carol of Mohrsville; two sisters: Barbara Sigafoos of Easton and Nancy Huber and her husband, Donald of Philipsburg, NJ; father-in-law and mother-in-law: Carlo and Barbara Castellani of Howard Beach, NY; a sister-in-law Martha Shoudt of Pittstown, NJ; several nieces and nephews, and many grand nieces and nephews. He was preceded in death by a brother, Wilson "Skip" Shoudt; brother-in-law, Bobbie Sigafoos, and his loyal buddy Conan. James' family would like to thank his care givers, Michelle Raike and Loretta Young, as well as all of his close friends and co-workers who helped them during his long illness. There will be a viewing on Tuesday, July 15 from 2:00 pm to 4:00 pm and 7:00 pm to 8:00 pm at the Bolock Funeral Home, corner of routes 940 and 390, Paradise Valley. Reverend Wayne Kaufman will conduct a funeral service on 8:00 pm at the funeral home. Cremation will follow at the Bolock Funeral Home Crematory. In lieu of flowers, memorial contributions can be made to the VNA Hospice House of Monroe County, 502 Independence Road, East Stroudsburg, Pa 18301.

James Robert Shoudt, 50, of Pocono Summit, died Friday morning, July 11 at the VNA Hospice House of Monroe County in Smithfield Twp. He was the husband of Kathleen Shoudt with whom he celebrated 12 years of marriage on June 7, 2008. Born in... View Obituary & Service Information

The family of James Robert Shoudt created this Life Tributes page to make it easy to share your memories.

Send flowers to the Shoudt family.