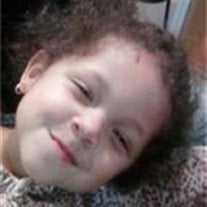 Jazelynne A. Parker, 3, of Bushkill, died Wednesday, October 14, 2009 at home in Lehman Township. Born in Morristown, New Jersey, she was the daughter of Anthony and Jenna (Sagurton) Parker. In addition to her parents, Jazelynne, is survived... View Obituary & Service Information

The family of Jazelynne Parker created this Life Tributes page to make it easy to share your memories.

Send flowers to the Parker family.