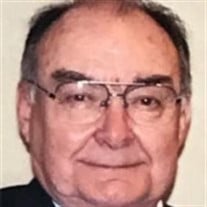 John K. Beehler of Tobyhanna passed away on April 5, 2017 at Spring Village in East Stroudsburg. John was born in Tobyhanna on May 30, 1928 and was the son of the late John G. and Dorothy (Price) Beehler. He was the loving husband of the late Mary M. (Charney) Beehler for 55 years. Mary passed away in 2009. He is survived by his son, John M. Beehler and daughter-in-law, Pamela J. Beehler of Jacksonville, Alabama, and his daughter, Eloise M. Beehler of Wilkes Barre, PA. He is also survived by his granddaughter, Kristin J. Beehler (the daughter of John M. and Pamela) who is a graduate of the United States Military Academy at West Point who served two tours of duty in Iraq and Kuwait and is now an MBA Candidate at Texas Christian University. He is also survived by his older sister, Helen Youngblood of Eugene, Oregon. John was pre-deceased by five brothers (Ken, Edward, Bill, Charles and Stanley) and two sisters (Pearl Mitchell and Mildred Darko). John attended high school at Coolbaugh Consolidated School in Tobyhanna and joined the U.S. Navy during his senior year at the age of 17. He served on the U.S.S. Juneau, a light cruiser ship. He completed his enlistment in 1948 at the rank of Petty Officer, Third Class. He then enrolled at Palmer Business School in Philadelphia, PA graduating in June of 1950. John was employed immediately thereafter as a pipe fitter with ITE Circuit Breaker in Philadelphia. In 1951, he returned home to Tobyhanna to work in the construction of the Tobyhanna Army Depot. In November of 1951, he began employment in the Post Office Department in the Railway Mail Branch. In 1954, he transferred to the Tobyhanna Post Office as a postal clerk. He was appointed Postmaster of the Tobyhanna Post Office in 1957 where he served admirably for the next 27 and a half years retiring on January 5, 1985. John was a member of the Tobyhanna United Methodist Church serving as the Financial Secretary, Treasurer, and Chairman of the Board of Trustees over the years. John was an outdoorsman enjoying hunting and fishing. In lieu of flowers, memorial contributions can be made to the John K. Beehler Scholarship Fund at Jacksonville State University in Jacksonville, AL. His viewing will be held at the Bolock Funeral Home on Monday, April 10th at 9:00 a.m. followed immediately by his funeral service at 10:00 a.m. He will be buried at St. Paul's Cemetary in Swiftwater, PA.

John K. Beehler of Tobyhanna passed away on April 5, 2017 at Spring Village in East Stroudsburg. John was born in Tobyhanna on May 30, 1928 and was the son of the late John G. and Dorothy (Price) Beehler. He was the loving husband of the late... View Obituary & Service Information

The family of John K. Beehler created this Life Tributes page to make it easy to share your memories.

Send flowers to the Beehler family.