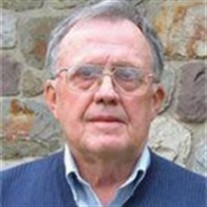 John V. Bush January 21, 1931 - August 18, 2010 John was the son of Claude and Grace Wolff Bush. John V. Bush, 79, passed away peacefully on Wednesday, August 18, 2010, with his wife and children by his side. Born and raised in Blakeslee, he resided in Pocono Pines and enjoyed the winters in Fort Myers, FL. John especially enjoyed golf, spending time with his grandchildren, travel with his wife, and the camaraderie of sports. John was a member for over 50 years of the Barger Masonic Lodge No. 325. He was also a member of the Pocono Lake American Legion. John was a 1953 graduate of East Stroudsburg State Teachers College. Following graduation, he served as a physical therapist in the United States Army, stationed at Fort Belvoir, VA. He went on to be an educator with the Pocono Mountain School District for 36 years. During that time, he also sold real estate at Locust Lake Village, Big Bass Lake, and Gold Key Lake. During his teaching years, John also enjoyed coaching baseball and basketball. The pinnacle of his coaching career was the 1967 Lehigh-Northampton League Baseball Championship. John is survived by his wife of 51 years, Gloria L. (Bryson). He was also the loving father of Dr. John R. Bush and wife Lisa of Pittsburgh, PA, and JoAnne Bush and husband James F Strunk, Jr. of Pennington, NJ. He is also survived by stepsister Virginia Mulligan. John was the cherished grandfather to Emily, J.J., Christopher, Patrick, Nettie, and Harriet. John's life transcended generations and he will be dearly missed by those who knew him. A celebration of John's life will begin with a viewing at Mt. Pocono United Methodist Church where he was a member. The viewing will begin at 10:00 am on Saturday, August 21, 2010. The funeral service will follow at 11:00 am with the Rev. David Goss officiating. Private burial will follow at Blakeslee Cemetery. In lieu of flowers memorial contributions can be made in his name to the Mt. Pocono United Methodist Church.

The family of John Bush created this Life Tributes page to make it easy to share your memories.

Send flowers to the Bush family.