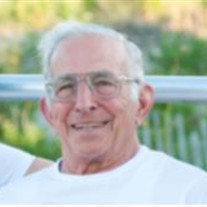 Joseph John Ferraro, 90, of Shrewsbury, New Jersey and formerly of Tobyhanna, Pennsylvania passed on Monday, January 3, 2022 in Holmdel, New Jersey. He was the loving husband of the late Patricia (Clinchot) Ferraro, who passed away in 2010. Born in Brooklyn, New York, he was the son of the late Annibale and Sophie (Caputo) Ferraro. A proud veteran, Joseph served in the United States Air Force. Subsequently, he worked as a mechanical engineer for the New York City Metropolitan Transit Authority until his retirement. Joseph was a devout Roman Catholic, who actively practiced his faith. He served many roles at the former St. Ann's Church in Tobyhanna, including being a Eucharistic minister, altar server, and all-around steward of the church. For years, Joseph and Patricia applied the teachings of the church by supporting under- privileged children in Central America. In addition to his passion for the church, Joseph was a family man and a true friend. Loving, quiet, patient and industrious are just a few of his traits. He is survived by his daughters: Catherine Ferraro and her husband, Felix Moletteri; Susan Ferraro and her husband, Peter Lio; and Linda Ferraro; son: Gerard Ferraro and his wife, Joan; sisters: Edith Giovanniello and Francis Barrera; and beloved grandchildren: Christina, Nicholas, Alexander, Celena, Joseph and Sarah. In addition to his wife, he was preceded in death by his sisters: Dolores Clinchot, Sue Alfiero and Grace Bonadonna. There will be a viewing from 1 to 3 p.m. and from 5 to 7 p.m. Monday, January 10th at Bolock Funeral Home. Reverend Father Sean Carpenter will conduct a Mass of Christian Burial at 11 a.m. on Tuesday, January 11th at St. Maximilian Kolbe Parish, 5112 Pocono Crest Road, Pocono Pines. Burial with Military Honors will follow at Laurelwood Cemetery, 901 Bryant Street, Stroudsburg.

Joseph John Ferraro, 90, of Shrewsbury, New Jersey and formerly of Tobyhanna, Pennsylvania passed on Monday, January 3, 2022 in Holmdel, New Jersey. He was the loving husband of the late Patricia (Clinchot) Ferraro, who passed away in 2010. Born... View Obituary & Service Information

The family of Joseph Ferraro created this Life Tributes page to make it easy to share your memories.

Send flowers to the Ferraro family.