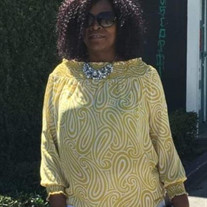 Marilyn C. Morris, 55, of Tobyhanna, Pennsylvania, died Thursday, July 8, 2021 at St. Luke's Hospital in Bethlehem. She was the loving wife of Wayne P. Morris, with whom she shared 19 years of marriage. Born in Belize, she was a daughter of Bernice Idolly (Wright) McFarlane of Fairfield, Connecticut and the late Lloyd McFarlane. Marilyn came to the United States in 1985, where she resided in Los Angeles, California and relocated to Bronx/Yonkers, New York shortly after. During her working career, she was an LPN and worked at Westchester Bronx OB GYN for many years. In 2009, Marilyn and Wayne settled to the Poconos where in 2015, she began working at Brookmont Healthcare Center in Effort. In addition to her husband and mother, she is survived by daughters: Shawntea Morris of Murfreesboro, Tennessee; and Zakiyah Morris of Tobyhanna, Pennsylvania; adopted daughters: Ashanti Morris of Palmdale, California and Ashelie Morris of Tobyhanna, Pennsylvania; brothers: Lloyd McFarlane Jr. and Stephen McFarlane both of Los Angeles, California; sisters: Lorraine Lacroix of Los Angeles, California; Prudence Brown of Fairfield, Connecticut; Louise Bonner of Killeen, Texas; and Eleanor McFarlane of Los Angeles, California; and mother-in-law, Saturnina Ethelbena Morris of Belize. She is also survived by a host of nieces and nephews, as well as one grandson, Matthew G. Joseph and one granddaughter, Lauren M. Baker. In addition to her father, Marilyn was preceded in death by her sister, Beverly McFarlane. There will be a viewing from 9 to 11 a.m. on Monday, July 19th at Bolock Funeral Home, 6148 Paradise Valley Road, Cresco, Pennsylvania. Elder Allan E. Morris of Newark, Delaware will conduct the funeral service at 11 a.m. at the funeral home. Burial will follow at St. Paul's Cemetery, which is located at 406 Upper Swiftwater Road, Swiftwater, Pennsylvania. In lieu of flowers, monetary donations may be made to help defray funeral costs. Please visit www.tmcfunding.com/funds/in-loving-memory-of-marilyn-morris/5736/.

Marilyn C. Morris, 55, of Tobyhanna, Pennsylvania, died Thursday, July 8, 2021 at St. Luke's Hospital in Bethlehem. She was the loving wife of Wayne P. Morris, with whom she shared 19 years of marriage. Born in Belize, she was a daughter of... View Obituary & Service Information

The family of Marilyn C. Morris created this Life Tributes page to make it easy to share your memories.

Send flowers to the Morris family.