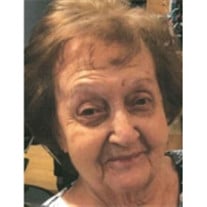 Marlene Vera Fisher, 84, of Pocono Lake, died Sunday, December 13, 2020 at Lehigh Valley Hospital - Pocono in East Stroudsburg. She was the loving wife of the late Willis Raymond Fisher Sr., who passed away in 1999. Born in Shades Creek, she was a daughter of the late Lloyd and Hilda (Altemose) Blakeslee. Marlene attended Bucks Township Shades Creek School until the 8th grade and graduated from Tobyhanna Township High School in 1954. She and Willis married in 1955 and lived in Key West, Florida, where Willis was stationed, while serving in the United States Navy. After his honorable discharge from the Navy they moved back to the Poconos and built their home in Pocono Lake. During Marlene's working career, she was a seamstress for various factories in the area. She later obtained a diploma in accounting from the Northeast Institute of Education. She is survived by a son, Willis Raymond Fisher Jr. and his wife, Laura McMillan of Costa Mesa, California; daughters, Jill Jenkins and her husband, Brian of Union Dale: Sherry Genest of Woonsocket, Rhode Island; and Holly Clapper and her husband, Reginald of Stroudsburg. Brothers: Harvey Blakeslee of York; and Eugene Blakeslee and his wife, Barbara of Berwick; sisters: Loretta Willmann of Scranton; and Nancy Blakeslee of Rome. In addition to her husband, Marlene was preceded in death by her daughter, Kimberly Shirley Fisher, who passed away in 1959 and Marlene's brother, Earl Blakeslee, who passed away in 1934. There will be a viewing from 10:30 to 11:30 a.m. Friday, December 18 at Bolock Funeral Home, 6148 Paradise Valley Road, Cresco. Burial will follow at Blakeslee United Methodist Church Cemetery.

The family of Marlene V. Fisher created this Life Tributes page to make it easy to share your memories.

Send flowers to the Fisher family.