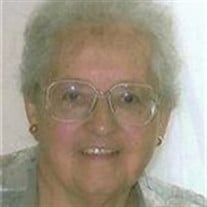 Mary Beehler, RN, 79, of Tobyhanna, PA died on June 9, 2009 at Mercy Hospital in Scranton. She was the wife of John K. Beehler, to whom she was married for 55 years. Born in West Wyoming, PA on August 15, 1929, she was the daughter of the late Ralph and Mary Charney. She was a 1947 graduate of West Wyoming High School and a 1950 graduate of Mercy School of Nursing in Scranton. Mary met her husband, John at Hahnemann Hospital (now Community Medical Center) while serving as a nurse in the emergency room when John's father was a patient. During her nursing career, Mary worked at Doctors' Hospital in Philadelphia, Hahnemann Hospital in Scranton, and Pocono Hospital in East Stroudsburg. She was also the camp nurse for Camp Tegawitha. Mary retired from nursing in 1985. She served as the choir director and organist at St. Ann's Catholic Church in Tobyhanna for 40 years. Mary loved life, music, family, church and people. She was very kind and always thought of others first. She was a loving wife, mother,grandmother, daughter, sister, nurse, friend, and colleague. In addition to her husband, John, she is survived by a daughter, Eloise Beehler of Tobyhanna, a son and daughter in law, Drs. John M. and Pamela Beehler of Union, Kentucky and her granddaughter, Kristin Beehler, a senior cadet and co-captain of the Army Women's Tennis Team at the United States Military Academy at West Point. She is also survived by brothers Leonard Charney of West Pittston, Ralph Charney of Garfield Heights, Ohio, Joseph Charney of Wilmington, Delaware, and Patrick Charney of Forty Fort, sisters Justina Charney of West Wyoming, Theresa Gonglefski of Swoyersville, and Agnes Olah of West Wyoming. She was predeceased by her sister Catherine Bubblo. There will be a viewing on Friday, June 12 from 2:00 to 4:00 and 7:00 to 8:30 p.m. at the Bolock Funeral Home, corner of Routes 940 & 390 in Paradise Valley. The Reverend Father Richard Ghezzi will celebrate a Mass of Christian Burial at 10:00 a.m. on Saturday, June 13 at St. Ann's Church in Tobyhanna. Interment will follow at St. Paul's Cemetery in Swiftwater, Pa. In lieu of flowers, memorial donations may be made to St. Ann's Church, PO Box 188, Tobyhanna, Pa. 18466

Mary Beehler, RN, 79, of Tobyhanna, PA died on June 9, 2009 at Mercy Hospital in Scranton. She was the wife of John K. Beehler, to whom she was married for 55 years. Born in West Wyoming, PA on August 15, 1929, she was the daughter of the late... View Obituary & Service Information

The family of Mary Beehler created this Life Tributes page to make it easy to share your memories.

Send flowers to the Beehler family.