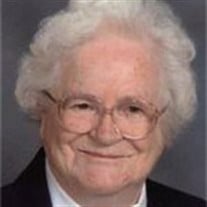 Mary Edith (Morrow) Dolan, 95, passed away on Monday, December 24, at the VNA Hospice House of Monroe County in East Stroudsburg. She was the wife of the late James E. Dolan. Born on January 18, 1912, in East Stroudsburg, she was the daughter of the late Charles Morrow, Theodosia (Smith) Morrow Macomber and Step-Daughter of John Macomber. Mary graduated from Stroudsburg High School in 1931. At her high school reunion in 2007, she received a prize for being the oldest person present. She was a resident of Monroe County all of her life, with the exception of seven years in Middletown, Pa. As a young adult, she was voted Queen of Monroe County. Mary was a homemaker, loving wife, mother, and grandmother. Mary was also a talented seamstress and quilter, with a love for gardening and nature. She and her husband James, co-owned Red Rock Cottages on Cherry Lane in East Stroudsburg from 1971 to 1983, where the her patrons called her the Best Cook of the Poconos. She also worked at Bushkill Falls and Bushkill Elementary School. She was a member of Our Lady of Victory Church in Tannersville. She is survived by three daughters, Marilyn J. Turner and her husband Donald of Pocono Township, Kathleen A. Kiick and her husband Grover of Pocono Township, Lynne M. Garris and her husband, Charles of Marshalls Creek; and daughter-in-law, Eugenia Benner Dolan of Maine; nine grandchildren, Kathryn Ferris, Donald Turner, Karen McCarter, Nancy Johnson, Ruth Clark, Keith Garris, Joseph Garris, and Michael and Timothy Dolan of the Netherlands; ten great grandchildren; two step great grandchildren; 11 great-great grandchildren; two step great great grandchildren; and many nieces and nephews. In addition to her husband, she was preceded in death by a son, Edward J. Dolan; a grandson, John M. Turner; great grandson, John D. Turner; a sister, Elsie Schoonover, a brother, John Macomber. There will be a viewing on Friday, December 28 from 7:00 p.m. to 9:00 p.m. at the Bolock Funeral Home, corner of routes 940 and 390, Paradise Valley. The Reverend Father Richard Czachor will celebrate a Mass of Christian Burial on Saturday, December 29 at 10:00 a.m. at Our Lady of Victory Church in Tannersville. Interment will follow in Prospect Cemetery, East Stroudsburg. In lieu of flowers, memorial donations may be made to VNA Hospice House of Monroe County, 502 Independence Road, East Stroudsburg, Pa. 18301 or Our Lady of Victory Church, PO Box 195, Tannersville, Pa. 18372.

Mary Edith (Morrow) Dolan, 95, passed away on Monday, December 24, at the VNA Hospice House of Monroe County in East Stroudsburg. She was the wife of the late James E. Dolan. Born on January 18, 1912, in East Stroudsburg, she was the daughter... View Obituary & Service Information

The family of Mary Dolan created this Life Tributes page to make it easy to share your memories.

Send flowers to the Dolan family.