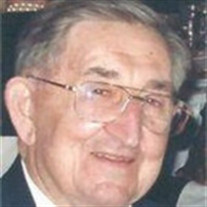 Michael Freach, Jr., 89, of Pocono Summit, died Tuesday, February 23, 2010 at Pocono Medical Center in East Stroudsburg. He was the husband of Susan (Loyko) Freach, to whom he was married for 63 years. Born in Scranton, he was the son of the late Michael and Maria (Topolyan) Freach. Michael worked in the construction industry for most of his life and later in his career worked for Cramers Home Center in Pocono Summit. An Army Air Corps veteran, he served in the Pacific Theatre during WWII. He was a member of Saint Mary of the Mount Church in Mt. Pocono, Wilson E. Fischer American Legion Post 413, in Pocono Pines, and also a member of the Pocono Mountain Seniors. In addition to his woodworking and wood carving skills, he was an avid sportsmen who enjoyed fishing and hunting, and in his later years was passionate about gardening. Michael loved spoiling his grandchildren. In addition to his wife, Susan, he survived by three sons, Michael Freach and his wife Elaine of Whitehall; Ronald Freach and his wife Jane of Dunmore; James Freach of Pocono Summit; one daughter; Brenda Godshalk and her husband Allen of Mount Bethel; six grandchildren, Kerrie Lohman and her husband John, Laura Goodling and her husband Brian, Ashley and Courtney Freach, Seth Freach and his wife Sharon, and Zachary Freach; and one great grandchild, Oaken Freach. He was preceded in death by sister Mary Ecklund. There will be a viewing on Sunday, February 28 from 2:00 to 5:00 p.m. at the Bolock Funeral Home, corner of routes 940 & 390 in Paradise Valley. A Mass of Christian Burial will be celebrated at 10:30 AM on Monday, March 1 at Saint Mary of the Mount Church, Fairview Avenue in Mt. Pocono. Interment will follow at Laurelwood Cemetery in Stroudsburg. In lieu of flowers, memorial donations may be made to Pocono Summit Volunteer Fire Company, P.O. Box 400, Pocono Summit, Pa 18346.

Michael Freach, Jr., 89, of Pocono Summit, died Tuesday, February 23, 2010 at Pocono Medical Center in East Stroudsburg. He was the husband of Susan (Loyko) Freach, to whom he was married for 63 years. Born in Scranton, he was the son of the... View Obituary & Service Information

The family of Michael Freach created this Life Tributes page to make it easy to share your memories.

Send flowers to the Freach family.