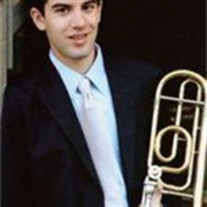 Michael Richard Lacey, 18, of Tobyhanna died Sunday, August 19 from injuries sustained in a motor vehicle accident in Coolbaugh Township. Born in Mineola, New York, he was the son of Michael and Cindy (Gazzola) Lacey. Michael graduated Valedictorian from Pocono Mountain West High School Class of 2007. An accomplished young musician, he was to attend NYU Steinhardt School of Culture, Education, and Human Development for music composition this fall. He received a Certificate of Achievement from Governor Rendell for scoring within the top 500 SAT scores in Pennsylvania. He was a member of the Pocono Mountain West Marching Band, Jazz Band and Concert Band. He received the Pocono Mountain School District Board of Education Award, Pocono Mountain West Music Performance Award, and the John Philip Sousa Band Award for musicianship. Michael played with the band two years ago for President George Bush at Tobyhanna Army Depot. As a trombone player, he was chosen for the PMEA District 10, Region V, and All-State Bands, and was selected to perform with the Celebration of the Arts ("COTA") Cats three years in a row. He also had the lead in the school play, the Sound of Music. Michael was the recipient of numerous scholarships, including the Mattioli Scholar Award, Boyd Scholarship, Pocono Mountain Panther Music Boosters Scholarship, Knights of Columbus Council 4159 Scholarship, Clear Run Intermediate School PTO Scholarship, Frank Sotel Memorial Mathematics Scholarship from Marywood University, and the Ralph Hughes Memorial Scholarship awarded by COTA. He was currently employed as a host at Perkins Restaurant in Mt. Pocono. In addition to his parents, he is survived by his grandparents, Cecelia Gazzola of Bronx, New York, and Thomas and Patricia Sweeney of Island Park, New York. Michael was a magnet of love to many aunts, uncles, cousins and friends. There will be a viewing from 2:00 to 4:00 p.m. and 7:00 to 8:30 p.m. on Thursday, August 23, at the Bolock Funeral Home, corner of Routes 940 & 390 in Paradise Valley. The Reverend Father Joseph Kopacz will celebrate a Mass of Christian Burial at 10:00 a.m. on Friday, August 24, at St. Mary of the Mount Catholic Church, Fairview Avenue, Mt. Pocono. Cremation will follow. In lieu of flowers, memorial donations can be made to the scholarship funds being coordinated on behalf of the family by the Pocono Mountain Panther Music Boosters ("PMPMB"). Checks should be made payable to PMPMB, and mailed to "Michael Lacey Memorial Scholarship Fund", 2069 Crow Trail, Long Pond, PA 18334.

The family of Michael Lacey created this Life Tributes page to make it easy to share your memories.

Send flowers to the Lacey family.