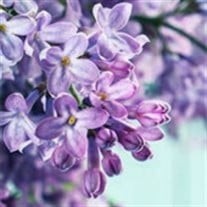 Mimi Pace Villa, 90, of Swiftwater, died Wednesday, April 22 at Pocono Medical Center in East Stroudsburg, Pa. She was the wife of Charles J. Villa. Born in Gloversville, New York, she was the daughter of the late Salvatore and Louise (Dellaversano) DiVilio. She lived in Italy with her grandmother until she was six years old before spending her school years in Gloversville. After high school, she moved with her sister to New York City. She worked as a food checker at the Hotel Taft and several other restaurants. After World War II, she moved to Miami, Florida where she met her husband while working at Howard Johnsons. They married in 1947 and resided in Baltimore, Maryland until her husband was transferred to the Tobyhanna Army Depot in 1954. From 1960 to 1970, Mimi was employed as a postal clerk at the Cresco, Buck Hill, Mountainhome, and Skytop Post Offices. She also worked as a teacher's assistant for Special Education children. As part of her artistic interests, she was an usher at the Pocono Playhouse, a painter, both oil and water, and an accomplished cook and seamstress. A lover of reading, Mimi continued working as a volunteer, at the Barrett Friendly Library and the Pocono Medical Center until her late 70's. She also loved to play cards and belonged to a local card club while living in Barrett Township for 25 years. Her greatest joy in life and accomplishments was raising her three daughters who she remained devoted to her entire life. Mimi was a two-time cancer survivor. In 1969, she was diagnosed with breast cancer and in 1988 with kidney cancer. She made recoveries and devoted her time with "Reach to Recovery" a program counseling others with breast cancer. She was a member of Our Lady of Victory Church in Tannersville. In addition to her husband, Charles, she is survived by three daughters, Constance Dresser of Gaithersburg, MD, Charlene Lacovaro and her husband, James of Silver Spring, MD, Celeste Walker of Philadelphia; a brother, Guido Divilio; one grandchild, Kristin Lacovaro. She was preceded in death by six sisters, Emily, Anna, Frances, Alice, Bertha, Sadie and two brothers, Frank and David. There will be a viewing on Sunday, April 26 from 2:00 to 5:00 p.m. at the Bolock Funeral Home, corner of Routs 940 & 390 in Paradise Valley. Father Richard Czachor will celebrate a Mass of Christian Burial at 10:00 a.m. on Monday, April 27 at Our Lady of Victory Church, Cherry Lane Road in Tannersville. Burial will take place on Tuesday, April 28 at 10:00 a.m. at Fort Indiantown Gap National Cemetery in Annville. In lieu of flowers, memorial donations may be made to St Jude's Children's Reasearch Hospital, PO Box 50, Memphis, TN 38101-0050

Mimi Pace Villa, 90, of Swiftwater, died Wednesday, April 22 at Pocono Medical Center in East Stroudsburg, Pa. She was the wife of Charles J. Villa. Born in Gloversville, New York, she was the daughter of the late Salvatore and Louise (Dellaversano)... View Obituary & Service Information

The family of Mimi Villa created this Life Tributes page to make it easy to share your memories.

Send flowers to the Villa family.