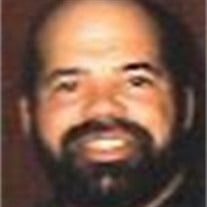 Moses Harper, 48, of Henryville died Sunday morning, June 17 at the VNA Hospice at Community Medical Center in Scranton. Born in East Stroudsburg, he was the son of Edna N. (Fish) Harper of Marshalls Creek and the late Willie Harper, Sr. Moses attended the East Stroudsburg High School and was self-employed as a roofing contractor. He was a member of the Lighthouse World Prayer Center in Paradise Valley and was a lifelong resident of Monroe County. Moses was a baseball coach for the Bushkill Youth Association. He loved hunting and fishing, shooting pool, playing darts and horseshoes, traveling and motorcycles. He enjoyed all types of foods, especially ice cream. We will miss Moses very much, especially the sound of his laughter. Moses is survived by his wife: Gwen (Mattews) Harper of Henryville; four sons: Matthew Johnson of Tobyhanna, David and Christopher Johnson of Atlanta, GA, and Travis Wells of Philadelphia; four brothers: Willie Harper, Jr. of Bushkill, John Harper and his wife Angela of Scranton, Lloyd Harper of Galveston, TX and Scott Harper and his wife Angel of Bushkill; nine sisters: Wilamae DeHaven of Allentown, Vera Blue of Galveston, TX, Elizabeth Harper of Stroudsburg, Elsie Keenhold of Tannersville, Edna Harper, Jr. of Marshalls Creek, Mary Nations and her husband James of East Stroudsburg, Debra Harper of Marshalls Creek, Brenda Price and her husband Harry of Marshalls Creek, and Lillie Mae Harper and her fiance Yusuf Aziz of Marshalls Creek; a sister-in- law: Hazel Baker of Chester; his dogs: Austin, Totos, and Kareem; and his cat Amanda. In addition to his father, he was preceded in death by a daughter: Ashley Crawford and a brother: Samuel H. Baker. There will be a viewing on Thursday, June 21 from 6:00 PM to 8:00 PM at the Bolock Funeral Home, corner of routes 940 & 390, Paradise Valley. The Reverend Charles Kollar will conduct a funeral service on Friday, June 22 at 1:00 PM at the Lighthouse World Prayer Center, Route 940 in Paradise Valley. Cremation entrusted to the Bolock Funeral Home Crematory.

The family of Moses Harper created this Life Tributes page to make it easy to share your memories.

Send flowers to the Harper family.