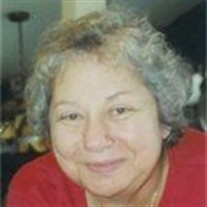 Nancy Abdoian, 74, of Pocono Lake, beloved mother, grandmother and friend, passed away on Saturday, April 16 at East Mountain Manor in Plains Twp., after a heroic battle with several serious illnesses. She was the devoted wife of the late Mesrob Abdoian, who passed away in January of this year. Born in Philadelphia on May 24th, 1930, she was the adored daughter of the late George and Alice Sarajian. At a young age, Nancy moved with her family to the Bronx, where she lived the majority of her adult life. She attended the New York Fashion Institute and was a talented artist. After she married, she was employed as a clerk in a bank and the retail industry. A devoted mother, Nancy volunteered in the school cafeteria to be close to her children. She loved the city, but felt that the Poconos would be a better place to raise her family. They built a home in Blakeslee in 1981and moved there with the children and her mother. She is survived by two children, a son, David Abdoian of Pocono Lake, a daughter, Lucille Brennan and her husband, Jerry of Toms River, New Jersey, two grandchildren, Matthew and Kevin Brennan of Toms River New Jersey; loving friend, Michelle, and her children Marge and Anthony of Pocono Lake, and many cousins and friends. Nancy gave all of her family unconditional love, support and guidance for which they will be eternally grateful. The loss of this wonderful woman will affect all those she leaves behind, but her memory and love will live forever in their hearts and minds. She shared many fond memories with her family that would bring a smile to all their faces. The Reverend Father James Weiner will conduct a funeral service at 11:00 a.m. on Wednesday, April 20 at the Bolock Funeral Home, corner of routes 940 & 390 in Paradise Valley. Interment will follow at Keokee Chapel Cemetery in Paradise Valley. There will be a viewing on Wednesday from 10:00 a.m. until the time of service at the funeral home.

Nancy Abdoian, 74, of Pocono Lake, beloved mother, grandmother and friend, passed away on Saturday, April 16 at East Mountain Manor in Plains Twp., after a heroic battle with several serious illnesses. She was the devoted wife of the late Mesrob... View Obituary & Service Information

The family of Nancy Abdoian created this Life Tributes page to make it easy to share your memories.

Send flowers to the Abdoian family.