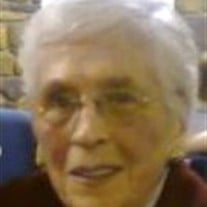 Olive Mae Davis, 100, of Mt. Pocono, died Sunday, May 9, 2021 at home. She was the loving wife of H. John "Jack" Davis, with whom she shared 75 years of marriage. Born in Pittsburgh, she was the daughter of the late Henry T. and Margaret (Kreps) Stump. When Olive met her future husband Jack in 1941, WWII had broken out, and Olive waited to marry the love of her life until he came home after the war, November 3, 1945. Olive and Jack settled in the Poconos after the war, eventually raising their family in Mt. Pocono. An active member of the community, Olive was actively involved with the local Scout Troops for her children. She was an active member of the Mt. Pocono United Methodist Church, where she taught Sunday School for many years. Olive was also a women's activist in her day, belonging to the United Methodist Women, helping to serve her community and the world. An accomplished pianist, Olive also accompanied many a Sunday Morning Service as well. In as much as women weren't allowed in Rotary until 1987, Olive became a charter member of one of the first women's service organizations in the Poconos at the time, the Rotary Ann's of Mt. Pocono. Olive also served her community by volunteering with Monroe County Meals on Wheels for many years. While raising her family and serving her community, she worked alongside her husband, Jack, and managed the H. John Davis Oil Company until their retirement in 2002. In addition to her husband, she is survived by her son, John Davis and his wife, Ann of Tobyhanna; daughters: Janet Mertz and her husband, Robert of Spencer, West Virginia; Margaret Johnson and her husband, Lieutenant Colonel Grant of Duncanville, Texas; grandchildren: Diana Davis, Lauren Lehman, and John Davis, Trevor and Justin Mertz, Benjamin Johnson, Stephanie Garcia, and Nathanael Johnson; four great-grandchildren: Natalie, Nadine, Griffin, Ingrid Mertz. Due to COVID, there will be private services at the convenience of the family for Olive. A Memorial Service in her honor will be held at a future date. In lieu of flowers, the family is asking that cards of condolence and/or memorial donations be made in Olive's name to the Mt. Pocono United Methodist Church, 12 Church St., Mt. Pocono, Pa. 18344.

Olive Mae Davis, 100, of Mt. Pocono, died Sunday, May 9, 2021 at home. She was the loving wife of H. John "Jack" Davis, with whom she shared 75 years of marriage. Born in Pittsburgh, she was the daughter of the late Henry T. and Margaret... View Obituary & Service Information

The family of Olive Mae Davis created this Life Tributes page to make it easy to share your memories.

Send flowers to the Davis family.