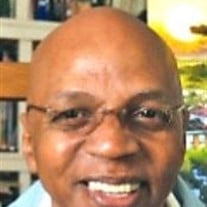 Oliver B. Johnson Jr., 72, of Cresco, Pennsylvania died Wednesday, October 27, 2021, peacefully at home. He was the loving husband of Marianna Midori (Blunt) Johnson, with whom he shared 44 years of marriage. Oliver was born in Jacksonville, Florida on December 12, 1948. He was the son of Oliver B. Johnson Sr. of Jacksonville, Florida, and the late Lillian (Haywood) James. Completely self-taught, Oliver started drawing when he received encouragement and an art set from his beloved grandfather as a young boy. His turning point came in 1977 when he joined the SGI-USA and began to practice Nichiren Buddhism. In the same year, he was featured in a Bedford-Stuyvesant art show in Brooklyn, whereupon his fame sky rocketed. Now considered one of the greatest artists of our time, his works are included in major art collections in the United States and Europe. Oliver stated his experiences in life empowered him to manifest his own mission. "I've struggled in my life but now I am able to turn any obstacle into a benefit. I am constantly chanting. Thanks to my wife Midori, we have raised three beautiful children and seven grandchildren in this Buddhist practice. No matter how successful I've been as an artist, the life condition I've developed is my biggest benefit - to perceive my daily existence, no matter how challenging, without fear." When Oliver began his practice, he immediately joined the young men's behind-the-scenes group, got involved with the stage crew for big performances and joined the young men's gymnastics group. Through these opportunities, he was fortunate to meet SGI President Ikeda on many occasions. Ikeda Sensei impressed upon Oliver the importance of taking responsibility for spreading this Buddhism and taking care of members. Whereupon he took various leadership responsibilities throughout his practice and until his final days he was a Men's Division District Leader caring for and encouraging members until the end. Oliver used Sensei's words and writings to continually uplift his family and members that he encountered on a regular basis. Left to cherish his memory are his wife, Midori; his son, Oliver Benjamin Johnson III of Pittsburgh; daughters: Gen Noelle Bowman of Raleigh, North Carolina; Hiroko Sandra Folio and her fiancé, Bradley Barnes of Cresco; grandchildren: Landon Taylor and Lloyd Alonzo Bowman, Ayden Tokio, Alana Maria, and Keanu Andrew Folio, Willow Kiera- Mae and Desmond Kenzo Barnes. In addition to his mother, Oliver was preceded in death by his sister, Sandra Haywood. He will be missed by so many. Nam-myoho-renge-kyo!

Oliver B. Johnson Jr., 72, of Cresco, Pennsylvania died Wednesday, October 27, 2021, peacefully at home. He was the loving husband of Marianna Midori (Blunt) Johnson, with whom he shared 44 years of marriage. Oliver was born in Jacksonville,... View Obituary & Service Information

The family of Oliver B. Johnson Jr. created this Life Tributes page to make it easy to share your memories.

Send flowers to the Johnson family.