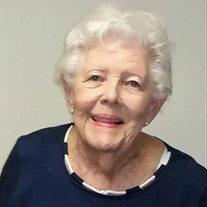 Pauline N. Bolock, 92, of Scranton, died Friday, January 21, 2022 after a brief illness. She was the loving wife of the late Frank J. Bolock Sr., who passed away in 1998.  Born in Scranton, she was a daughter of the late Thomas and Mary (Lyons) Carroll.   A lifelong resident of Scranton, Pauline graduated from Saint Patrick High School (West Scranton) and Scranton-Lackawanna Business College. She retired from Marywood University where she was the secretary for the School of Art for many years. Pauline was an enduring member of St. Patrick's Catholic Church where she was a member of the Altar and Rosary Society, the Quilting Club, and was an active worker at the church picnic and served as Chairperson for the picnics in her younger years. In addition, Pauline was active within her community and was a member of the Century Club, Throop Seniors and The Theresians of Scranton where she served as Secretary for many years. She has volunteered with the Little Sisters of the Poor and Holy Family since her childhood. Pauline proudly maintained her independence until her recent illness. She is survived by her sons: Attorney Frank Bolock Jr. and his wife, Robin of Waverly; Paul Bolock and his wife, Ellen of Mechanicsburg; and Michael Bolock of Cresco; eight grandchildren: Attorney J. Julius Bolock, Leo Bolock, Capt., U.S. Army, Rt., Dr. Alexa Bolock, Christopher Bolock, Stephen Bolock, Michael Bolock, Sarah Bolock and Matthew Bolock; two great-grandchildren: Alina and Madelyn; and several nieces and nephews. In addition to her husband, Pauline was preceded in death by an infant son, James; a brother, Thomas Carroll; three sisters: Helen Guinan, Marian Carroll and Kathleen McMurtagh.   The Reverend Father Richard Fox will celebrate a Mass of Christian Burial Saturday, January 29, 2022 at 10:00 a.m. at St. Patrick's Church, 1403 Jackson St., Scranton, PA 18504.   Family and friends that are attending the services are strongly encouraged to abide by the CDC guidelines to take precautions and wear a facial mask when entering the church. In lieu of flowers, memorial donations can be made to St. Patrick's Church.

The family of Pauline N. Bolock created this Life Tributes page to make it easy to share your memories.

Send flowers to the Bolock family.