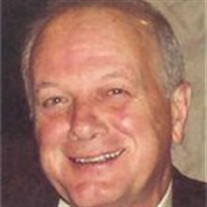 Peter's journey on earth quietly ended on August 10, 2006. His soul is now resting in Heaven in the loving arms of our Lord, which is his reward for living a peaceful and purposeful life. Born in Denta, Rumania, February 28, 1940, the son of the late Peter and Maria Zimmermann, he arrived in America during Christmas of 1949 and that arrival always remained a special memory for him. He learned the value of family at a very young age and as a man he dedicated his life to the family he created. He leaves to cherish his loving memory, his wife, Christina; his children, Peter and Susan Zimmermann, Marc and Allison Zimmermann, and the grandchildren that always put a sparkle in his eye, Rachel, Molly, Nicholas, Lauren, and Bryan Zimmermann. In addition to his wife and children, he is survived by his brother, Phillip; sister, Erika Testa; and several nieces and nephews. He was preceded in death by his sister, Margaret in 1998. Peter enjoyed a game of golf, but took his greatest pleasure looking at a flower, watching a bird fly by, and listening to his music. He lived with great courage and dignity through his sickness and, in the end, it was the support of his many great friends and the angels at Hospice that allowed Peter to laugh, to love, and to leave us peacefully with a smile on his face. Peter was a member of Saint Ann's Church in Tobyhanna, where a Mass of Christian Burial will be celebrated by the Reverend Father Richard Ghezzi at 11:00 a.m. on Tuesday, August 15. His family will received friends from 2:00 to 4:00 and 7:00 to 8:30 p.m. on Monday, August 14 at the Bolock Funeral Home, corner of routes 940 & 390 in Paradise Valley. It was Peter's wish that in lieu of flowers, memorial donations be made to the VNA Hospice House, 142 E. Brown Street, East Stroudsburg, Pa. 18301

Peter's journey on earth quietly ended on August 10, 2006. His soul is now resting in Heaven in the loving arms of our Lord, which is his reward for living a peaceful and purposeful life. Born in Denta, Rumania, February 28, 1940, the son of... View Obituary & Service Information

The family of Peter Zimmermann created this Life Tributes page to make it easy to share your memories.

Send flowers to the Zimmermann family.