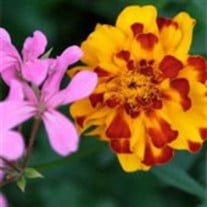 Printa Bernice Post, 87, of Arlington Heights, Illinois, formerly of Henryville, Pennsylvania, died December 9, 2010. Printa was born September 25, 1923, in Cloverport, Tennessee, the daughter of Benjamin H. and Violet Blossom (Goodson) Johnson. She was a 1940 graduate of Central High School in Little Rock, Arkansas, where she was elected to the National Honor Society. She married Richard W. Post in 1943 in Abilene, Texas. Following Richard's service in World War II, the couple made their home in Henryville. Bernice was a talented homemaker and supported the couple's children and their many sports and musical activities. She was active in several community and civic groups throughout the Poconos and served as secretary for many years at St. Paul Lutheran Church in Tannersville, Pennsylvania, where she was a longtime member. She is survived by her son Robert A. Post and wife JoAnn, of Farmington Hills, Michigan; son James W. Post and wife Kathleen, of Estero, Florida; and daughter, Linda Post Bushkofsky and husband Dennis, of Arlington Heights, Illinois. She is also survived by seven grandchildren, four great-grandchildren, and several nieces and nephews. She was preceded in death by her husband, parents and three brothers, Ellis, James and John. Visitation will be held Tuesday, December 14, from 7:00 - 8:30 p.m. at Bolock Funeral Home in Cresco, Pennsylvania. A funeral service will be held Wednesday, December 15, at 11 a.m. at St. Paul Lutheran Church, Fish Hill Road, Tannersville, Pennsylvania, with a visitation at 10 a.m. at the church. Interment in Laurelwood Cemetery, Stroudsburg, will immediately follow the service. In lieu of flowers, gifts may be made to the National Multiple Sclerosis Society, PO Box 4527, NY, NY 10163; Women of the Evangelical Lutheran Church in America, 8765 W. Higgins Rd., Chicago, IL 60631-4101; St. Paul Lutheran Church, PO Box 196, Tannersville, Pa. 18372; or The Lutheran Home, 800 W. Oakton Avenue, Arlington Heights, IL 60004

The family of Printa Post created this Life Tributes page to make it easy to share your memories.