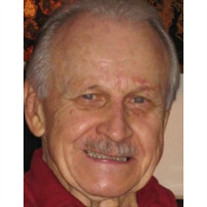 Robert "Bob" Donald Kupfer, 92, of Buck Hill Falls, died Tuesday, October 27th, 2020 at Pleasant Valley Manor in Stroudsburg. Born in Beardstown, Illinois, he was the son of the late Otto and Verna (Wilday) Kupfer. Since his youth, Robert had a curious, inquisitive, and expansive mindset. Earnest to see the world, Robert joined the United States Navy when he was seventeen, serving honorably, and achieving the rank of Storekeeper Third Class; Robert was a veteran of World War II. Robert studied Mathematics at Carthage College, graduating in 1952. Upon graduation, Robert joined Turner Construction Company, beginning a long and illustrious globetrotting career; starting in the Copper Mines of White Pine, Michigan, to the Mei Foo Housing Project in Hong Kong, to the King Faisal Medical Center in Saudia Arabia, and the Singapore Changi International Airport. Robert had a panache for constructing both buildings and relationships around the world. Robert served on the Board of Directors from 1974 to 1988, retiring as Co-President of Turner in 1987. If you asked a hundred people who Robert Kupfer was, they would all give you a different story: A secret agent. A superhero. The tallest man in the world. Robert was none of these things, or perhaps he was all of them. What he was, was a storyteller. It didn't matter if he was breaking the ice with heads of state, helping a stranger on the side of the road, or entertaining his wide-eyed grandchildren. No matter the occasion, Robert had a story. If you asked Robert Kupfer who he was, he would tell you, first and foremost, a proud father. Robert would speak effusively about his children and stepchildren. From Karl's passion for the great outdoors and craftsmanship, to Lisa's artistic talents, to Josh's terrible golf game, and I-Lee's own Turner adventures, above all, they were his pride and joy. Robert was the loving husband of Min Hwa Kupfer. In addition to his wife, he is survived by his daughter, Lisa Polzin and her husband, Barry of Marquette, Michigan; stepson, Josh Hwa and his wife, Ana of Canton, Massachusetts; and stepdaughter, I-Lee MacDonald and her husband, Andrew of Mokena, Illinois; grandsons: Bob and Max Polzin; step grandchildren: Zoey and Evie Hwa; and Reese, Quinn, and Drew MacDonald. In addition to his parents, he was preceded in death by his four sisters and son, Karl Kupfer. There will be a viewing from 10 to 11:30 a.m. Tuesday, November 3 at Bolock Funeral Home, 6148 Paradise Valley Road, Cresco. Reverend Susan Treanor will conduct a service at 11:30 a.m. at the funeral home. A Memorial Service in his honor will take place in the near future once current travel restrictions have been lifted. In lieu of flowers, memorial donations may be made to Robert's preferred charitable organization, Leukemia & Lymphoma Society, https://donate.lls.org/ Private cremation is entrusted to Bolock Funeral Home Crematory.

The family of Robert Donald Kupfer created this Life Tributes page to make it easy to share your memories.

Send flowers to the Kupfer family.