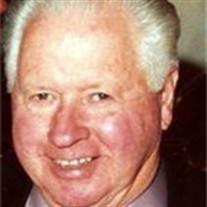 Robert A. Murray, 75, of Cresco passed away Tuesday, August 1st, at the Good Shepard Medical Center in Bethlehem. He was the husband of Josephine (Sawicski) Murray. Born on Jan. 6th, 1931 in Wilkes-Barre, Pa, he was the son of the late William and Catherine (Mulhern) Murray. He was a graduate of Coughlin High School in Wilkes-Barre. Robert was a member of St. Mary of the Mount Catholic Church in Mount Pocono. He served in the United States Navy during the Korean conflict. He was known for his skill as a building contractor in addition to his employment for many years as the Superintendent of Construction at the Pocono Manor Inn. He possessed a kind and generous nature, sharing his many talents with everyone. He loved discussing politics and had a quick Irish humor. Robert and his wife Jo were to celebrate their 50th wedding anniversary this month. "Bob" will be dearly missed by his family, friends and the many people whose lives he touched. In addition to his wife, Jo; he is survived by two daughters, Colleen Murray of Anza, CA, Karen Murray Pearson and her husband Tom of Plainfield, VT; three grandchildren, Jeremy Murray Pearson, Drennon Murray and Dillon Murray; his sister, Ruth Delia, of San Diego, CA; many nieces, nephews and cousins. He was preceded in death by three siblings, James, William and Patricia. The Reverend Father Joseph Kopacz will celebrate a Mass of Christian Burial at 10:00 a.m. on Saturday, August 5 at St. Ann's Church in Tobyhanna. Interment will follow at Laurelwood Cemetery in Stroudsburg. There will be a viewing from 5:00 to 8:00 p.m. on Friday, August 4 at the Bolock Funeral Home, corner of routes 940 & 390 in Paradise Valley. In lieu of flowers, memorial donations can be made to Women's Resources of Monroe County, 215 West Main St. P.O. Box 645, Delaware Water Gap, Pa 18327.

Robert A. Murray, 75, of Cresco passed away Tuesday, August 1st, at the Good Shepard Medical Center in Bethlehem. He was the husband of Josephine (Sawicski) Murray. Born on Jan. 6th, 1931 in Wilkes-Barre, Pa, he was the son of the late William... View Obituary & Service Information

The family of Robert Murray created this Life Tributes page to make it easy to share your memories.

Send flowers to the Murray family.