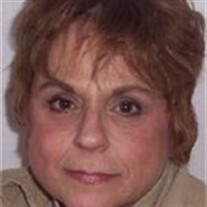 Rosemarie Murray, 61, of Long Pond, died Thursday, April 17 at the VNA Hospice House of Monroe County in East Stroudsburg. Rose was born in Nova Scotia, Canada, but grew up on Thomas Street in Stroudsburg, Pa. She attended Stroudsburg elementary schools and spent many happy hours reading at the Monroe County Public Library as a child. She graduated from Abbot Academy (now Phillips Andover) and attended Boston University. She lived in Hunterdon County, NJ from 1985 until 2004. Rose worked in the security industry, eventually serving as director of operations for an international security firm that grew tremendously as a result of her efforts. The hallmarks of her character were honesty, loyalty, and an abiding sense of humor that cheered everyone who met her, even in her final illness. Rose loved reading and interior design. She raised her children with great warmth, intelligence, and wit. Rose loved animals of all kinds and especially supported companion animal organizations. She is survived by a son, Jeffrey Sumner, of Swarthmore; a daughter, Amanda Sumner of Mt. Pocono; a brother, Charles Monatt of Puerto Rico; four sisters all of Canada, Deborah Sherren and Barbara Burns, both of Charlottetown, PEI, Irene Burton of South Brook, NL, and Pamela Sherren of Halifax, NS; six grandchildren; and several nieces and nephews. She was preceded in death by a son, David Sumner. There will be a visitation on Thursday, April 24 from 7:00 to 8:00 p.m. with a Prayer Service at 8:00 p.m. at the Bolock Funeral Home, corner of Routes 940 & 390 in Paradise Valley. The Reverend Father John Boyle will celebrate a Memorial Mass at 10:00 a.m. on Friday, April 25 at Our Lady of the Lake Church in Pocono Pines. Cremation was entrusted to the Bolock Funeral Home Crematory. In lieu of flowers, please make memorial contributions to the Monroe County SPCA, RR1, Box 1237, Stroudsburg, Pa. 18360

The family of Rosemarie Murray created this Life Tributes page to make it easy to share your memories.

Send flowers to the Murray family.