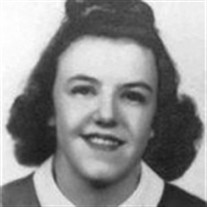 Ruth Agnes Cullinan Plaushin, 82, of Swiftwater, died Tuesday, September 5. Born the youngest of seven children to the late John and Mary O'Neil Cullinan in Pittsburgh on April 2, 1924, she attended Peabody High School, developing an enthusiasm for cheerleading and ballroom and ice dancing. She worked for the Pennsylvania Railroad where she met and married fellow "Pennsy" Railroader, Frank Plaushin, on May 22, 1954. Their love for each other and the Pocono Mountains were magnified in their Brookdale Lake honeymoon, leading them to buy land and build their Pocono home within sight of Brookdale some years later. After the railroad folded she went on to secretarial positions in a variety of settings such as Kelly Temporary Services, the Wilkinsburg School District, the Blood Bank of Pittsburgh and locally, Connaught Laboratories. However, her real joy was in volunteering. Ruth was an active parishioner of St. Mary's Catholic Church where she was involved in many organizations. She was incredibly devoted to her liturgical ministry as Lector, practicing her readings in a hand-held recorder until she got it "just right." All her adult life she gave herself to volunteering, be it Den Mother, helping in parish projects, working at RSVP, doing political advocacy and campaigning and also serving on the Pocono Township Ambulance Crew. She most enjoyed hospital work as noted in her happy service to families in the Pocono Medical Center's ICU waiting room. Railroader, Little League Baseball scorekeeper, Den Mother, driver, secretary, wife and mother, she filled her life with family, friends and the Catholic community of faith founded in Christ's love for us. She elevated cooking to fine art and was thrilled to have others gather at her table. She had a love of books, an abiding affection for Ireland and her Irish heritage, an instinct for hospitality, and a love for children. She valued homecomings, and going the extra step. She passed on an appreciation of a good cause and the power of righteousness, integrity and simple forthrightness. We do not know how many lives she touchedonly that in meeting them they all say, "What a sweet lady!" Ruth leaves a son, Mark, an Oblate of St. Francis de Sales and Army Chaplain; her sister-in-law, Elizabeth; her nephews Steve and Chris; her niece, Judy and nephew William; four grand nieces and nephews; a great grand nephew; and a huge extended family that was blessed by her presence in countless ways. The family trusts that she now dines at the Lord's Table. There will be a viewing on Sunday, September 10 from 3:00 to 5:00 p.m. at St. Joachim Roman Catholic Church, 1527 Church Street, Philadelphia, Pa. followed by a Mass of Christian Burial at 5:00 p.m. A second viewing will be held on Monday, September 11 from 5:00 to 7:00 p.m. at St. Mary of the Mount Church, 27 Fairview Avenue, Mt. Pocono, Pa. followed by a Mass of Christian Burial at 7:00 p.m. Interment will take place at 11:00 a.m. on Tuesday, September 12 at St. Casmir's Cemetery in Pittston. Memorial donations may be made to the American Cancer Society, 1101 Hill St., Jessup, Pa. 18434 or The American Heart Association, 212 East Broad Street, Bethlehem, Pa. 18018 or The Center for Faith and Culture at DeSales University, 2755 Station Avenue, Center Valley, Pa. 18370 or The Salesian Endowment, Oblates of Saint Francis de Sales, 2200 Kentmere Parkway, Wilmington, DE 19806

The family of Ruth Plaushin created this Life Tributes page to make it easy to share your memories.

Send flowers to the Plaushin family.